The Man Who Haunted Himself

Made in 1969, released in 1970, this film was written and directed by Basil Dearden (The Blue Lamp, Violent Playground, Victim) a seasoned and talented director, a great story teller of the screen with many of his features focusing on outsiders and people alienated by society, who began his career directing the great comic genius Will Hay. Anyone familiar with Will Hay, the British comedian of the 30’s and the 40’s, will recall that much of Hay’s comedy is him struggling in the world, whilst keeping a smile on his face.

The Man Who Haunted Himself starred Roger Moore, fresh from the hit TV show, The Saint as Simon Templar, and two years before he took over as James Bond from Sean Connery.  Based on the 1957  novel The Strange Case of Mr Pelham by Anglo-Canadian Anthony Armstrong.  Shot on location in London, the film centres around Mr Pelham (Moore) an engineering company executive. Mr. Pelham is a strait-laced and conservative man who works hard, drinks at his private club and provides for his wife and children, but without any fun or true affection, just mainly rules and regulations.  However deep down there is a dark and dangerous side yearning to get out.  One night, whilst driving his Rover P5B home, Pelham is overcome by a desire to drive faster, unable to control these urges, he puts his foot on the pedal, which results in a near fatal accident.  Whilst on the operating table, the surgeons see two heartbeats on the ECG, believing it is a mistake with the machinery they proceed with saving Mr Pelham.  (Coincidentally, Dearden died a year after completion of The Man Who Haunted Himself in a road accident on the M4 Motorway). 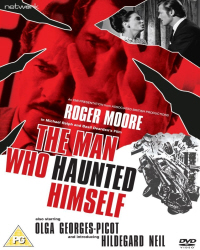 After the accident, strange things start happening to Pelham, sightings of him at places when he was elsewhere, a woman claiming to be his lover (Pelham may not be the most romantic person in the world but he is faithful to his wife), and as a loyal employee to his firm, there is an air of suspicion that he may be leaking company information in favour of a merger which he opposed prior to his road accident.  Coupled with him being followed by a silver Lamborghini, Pelham starts to question his sanity or that there is conspiracy against him involving all those he respects and admires, and when he finds out the true reason, it is worse that any nightmare he could imagine.

The  Man Who Haunted Himself is an engaging psychological thriller. There are no twists or turns but the study of a man entering into an abyss. Wonderfully acted by Moore who, over the years, has been criticised for his one dimensional acting.  This has never seemed to have fazed or upset Moore who now, and rightly so, is perceived as a British icon. Furthermore if there is a film to prove all those wrong, then The Man Who Haunted Himself certainly does that.   Without wishing to give the plot away, Moore’s acting skills are tested to the full, as he has played the same man in two versions of himself, which for any actor must be a true challenge. The pace of the film is rapid with a tense atmosphere from the onset, you do not have wait for the film to develop.  Matched with wonderful shots of London in the late sixties and early seventies and an epic string driven and, at times, ambient sound track composed by the underrated Michael J Lewis (Theatre of Blood, Unman, Wittering and Zigo, The Hound of the Baskervilles (1983 with Ian Richardson as Sherlock Holmes), it is a treat for fans of retro and thriller films.  In addition, there are elements of dark humour in the film which adds to the enjoyment of the viewing.  Now seen as a cult classic, which is a label it certainly deserves.