A Tribute to our Top Bird

Antonia Bird the wonderful human being and film & TV director passed away recently at the age of 54. I was blessed to have known and worked with her and she made a big and lasting impact on my life. It was 1999 I had recently adapted Irvine Welsh’s “Filth” into a screenplay for HAL ( a subsidiary of Indie film giant Miramax ) and Irvine graciously asked me to meet Antonia with a view to getting involved in an adaptation of a true story. Irvine had recently joined Antonia, Mark Cousins and Robert Carlyle in forming a production company called 4-Way. 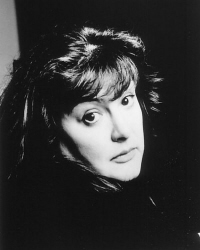 Irvine Welsh - writer supreme and top lad - Antonia Bird - great director - Robert Carlyle - brilliant actor and Mark Cousins - the font of all knowledge and champion of film; what a team! I would have been insane not to take up the offer. The story we worked on was based on the adventure of two teenagers from the Yorkshire town of Pontefract who happened to find themselves banged up in the Bangkok Hilton and how they miraculously managed to escape. It became clear early on that Antonia wanted to concentrate on the damage the adventure had caused the couple rather than make a great escape story.  Being a relatively new screenwriter the experience I gained from Antonia was invaluable. She was the first director I had worked with and her experience and knowledge enabled me to become a better writer and gave me insight into the mechanics of film making.

I spent many days working with her and Irvine at their little office in Shoreditch and it became apparent that we had a lot more in common than a love of film. Antonia had been a left wing activist for most of her life like my mum Dorothy, and it transpired that our paths must surely have crossed during The Miners Strike. We had so many political reference points to chat about that it sometimes felt the script was getting in the way. None the less we pushed on and ended up with a script we were all really proud of
.
Around this time I lost my young sister in law in a tragedy. She died a couple of days after giving birth to a baby girl. She left behind two young girls whose father’s ( spunk donors)  had unceremoniously fucked off. Deadbeats.  Antonia and Irvine were so supportive and understanding that I am eternally grateful to them both, so much so that our niece - whom we would now be raising - was named Antonia.

4-Way optioned an original screenplay of mine called “Citizen Ken” not long after and I got the chance to keep working with Antonia. Antonia was patient and a great teacher who encouraged me to really experiment with the main character. Again, I learned things about the screenwriting process that had never crossed my mind. It really was an education that has left me with confidence in my skills.

Antonia was a no bullshit, tell it like it is woman. She exuded a confidence and integrity that was infectious. Her smile was warm and wonderful and a great countenance to her tough talking professionalism that needed to be brought out for the often clueless executives holding the purse strings.

My favourite story about Antonia Bird was the time she stood up to the behemoth film producer Harvey Weinstein of Miramax infamy. Antonia was in the development process with the notorious ball-breaker and she stood up and took no shit from him - something many men can only dream about.  Obviously Weinstein liked her all the more for it - as is usually the case with powerful professionals who understand the algebra of creative politics.

I haven’t been in touch with Antonia over the last few years and that makes me feel sad. It’s times like these that you realize that life really is just a flash of light between two curtains of eternity, and that you should cherish the people whom you admire and respect and love spending time with.

For those of you not familiar with Antonia’s work you should watch Priest, Face, Ravenous, The nazi skinhead Cracker episode ( all with Robert Carlyle)  and her recent BBC antidote period drama series to the sickly Downton Abbey, The Village starring John Simm. Antonia was a measured director who drew you in through great pacing and integrity of her characters. Substance over style was how I always viewed her work. and it often reminded me of the work of the great Vittorio De Sica ( Bicycle Thieves ) in that humanity was always the main focus of the narrative.