© Words Matteo Sedazzari
When the album opens up with Steve Marriott  bragging at the start “I've got a new axe, it's gonna make me rock hard man! “, you just know you are about  to enter into a loud, powerful and epic voyage of pure rock ‘n’ roll.  And if you were lucky enough to be in attendance at the Fillmore you certainly got your money’s worth, as you do with this album.   Marriott and the boys play more than just a gig, they give a heroic performance that can now be remembered for the worth that it should.


Humble Pie was originally  Steve Marriott (vocals, guitar, harp), Peter Frampton (vocals, guitar), Greg Ridley (bass, vocals) and Jerry Shirley (drums). Formed at the start of 1969 by Peter Frampton, formally of the sixties pop band, The Herd and Steve Marriott, ex The Small Faces, a band with its mixture of soul, r ‘b’ n and pop sensibilities.  Stylish Mods from London that are often seen as the authentic Mod band, due to their impeccable and original dress sense equalled by their sound. Frampton was bored at being a pop star, Marriott wanted his former band to discover and push for more of a rock sound which was dominating the tail end of the decade via bands like The Who, Led Zeppelin, Cream and many more. Unable to find satisfaction in their current bands, Frampton and Marriott joined forces (Marriott did want Frampton to join The Small Faces which was turned down). The other remaining Small Faces joined Rod Stewart and Ronnie Wood to form The Faces, which became Rod Stewart and The Faces.  It was decisions like this, coupled with a tense atmosphere within the group that led Marriott to quit.   Both accomplished musicians and vocalists, Marriott is often seen as the greatest ever white soul singer, and requested the presence of Ridley and Shirley to join them. 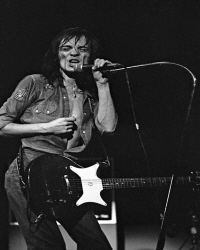 Humble Pie initially signed to The Small Faces original  label, Immediate, owned by The Rolling Stones original manager, Andrew Loog Oldham.  Their first album As Safe as Yesterday Is reached number 32 in the UK August 1969, but not in the US. The following two albums, Town and Country and Humble Pie failed to chart on both sides on the Atlantic, and after the release of Town and Country, Humble Pie signed with A & M when Immediate folded and obtained a new manager, Dee Anthony, who had already broken the US with Sheffield born singer Joe Cocker, which came via Cocker’s live album Mad Dogs and Englishmen, tour and film.  Knowing it was a successful formula, he persuaded Humble Pie to do the same, by touring the US, record the concert and release a live album. Anthony believed they should drop any former acoustic driven numbers and go totally for rock, his request was granted, and the album oozes with blood, sweat and tears. It is easy to tell that Humble Pie are clearly enjoying  themselves and are free from the shackles of a recording studio.  Prior to Performance Rockin' the Fillmore, Humble Pie released Rock On at the start of 1971, and it was the last studio album to feature Peter Frampton.  It reached 118 in the US Billboard charts, not a huge success, but enough to ensure that the US were starting to wake to the sound of Humble Pie.

Performance Rockin' the Fillmore was released in November 1971 as a double live album, which only features seven songs, side two has just one track on it I Walk on Gilded Splinters, which is a 23:25 version. The 2013 release doesn’t offer any new undiscovered tracks, but a recording of two shows a night over two nights  28th and 29th May 1971 Fillmore East, New York. However this is far from flogging a dead horse, as each CD (four in total) is a super master class in musicianship and showmanship.  Apart from Stone Cold Fever and additional material credit for I’m Ready, the other remaining songs are covers, however Humble Pie make the songs Stone Cold Fever, I Don’t Need a Doctor and I Walk On Gilded Splinters very much their own. There are hard edged solos, imaginative improvisation and overwhelming syncopation between the band, they take the basic structure of a blues or rock ‘n’ roll  song  to another level, Humble Pie played each song like their life depended on it.  Coupled with Marriott’s immense and harmonious soulful vocals, the listener is left with no choice but to listen to each CD one after the other, as hearing is certainly believing.  As much as I try to avoid clichés, ‘but they certainly don’t make them like this anymore’.

Thanks to modern technology, I have seen the Fillmore gig on YouTube, and it left me in a trance with an itch to dust off my old guitar and play the blues like a little devil. In addition Marriott’s new axe certainly entered a baptism of fire that night, as he rocked hard.  Nice ..... as his former band The Small Faces used to say.