"Now Muscle Shoals has got the Swampers;
And they've been known to pick a song or two.
Lord they get me off so much.
They pick me up when I'm feeling blue
Now how about you?"
"Sweet Home Alabama" by Lynyrd Skynyrd

The Muscle Shoals Rhythm Section was the resident band at Muscle Shoals Sound Studios, Alabama. Like the Wrecking Crew in Los Angeles, and the Funk Brother at Motown, they were the backing band on dozens of gold and platinum hits. The four founding members were Barry Beckett (keyboards), Roger G Hawkins (drums), David Hood 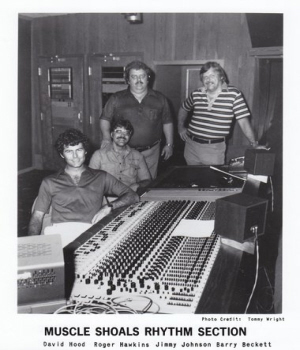 According to Hood, the name, Muscle Shoals Sound was intended as a joke. The group felt Detroit had its sound (Motown); Nashville and Memphis had theirs, so Muscle Shoals would have its own too. The Muscle Shoals Sound Rhythm Section, was the first rhythm section to own its own studio and, eventually, its own publishing and production companies. During the late 60s and throughout the 70s the cream of rock, pop and soul found their way to 3614 Jackson Highway in Sheffield, AL. Other session musicians joined Muscle Shoals Rhythm Section. Their sound was unique and singer/songwriter Leon Russell dubbed them "The Swampers" and the name stuck. The Swampers included Pete Carr (lead guitar, sound engineer and producer). He played on almost all the sessions throughout the 70s, and can be heard on Bob Seger’s "Main Street," and Rod Stewart’s "Tonight's The Night," and "Sailing”

Randy (piano) penned several hits including: Eddy Rabbitt’s "Suspicions" (1979 ); Dolly Parton and Kenny Rogers’ "Real Love" (1985); Kim Carnes’ "Crazy In Love"(1988 ). Will McFarlane (guitar) joined the Muscle Shoals Rhythm Section in 1980 after playing with Bonny Raitt and Dewey Lyndon "Spooner" Oldham (piano) came from FAME. “Spooner “ was an accomplished songwriter and together with Dan Penn wrote The Box Tops’ ‘Cry Like a Baby’(1968), "I'm Your Puppet" (James and Bobby Purify) (1966), and "It Tears Me Up" (Percy Sledge) (1966). Muscle Shoals Sound was a unique blend of country, gospel and R & B. Jerry Wexler (Atlantic Records) liked the sound from the Alabama studios and brought artists like Wilson Pickett and Aretha Franklin to record with the Swampers. The initial successes led to the arrival of more mainstream rock and pop performers among them The Rolling Stones, Traffic, Boz Scaggs, Willie Nelson, Paul Simon, Bob Dylan, Dr. Hook, Elkie Brooks, and Millie Jackson to work at the studios. The Staple Singers (from Stax Records) enjoyed their greatest crossover successes with "Respect Yourself" (1971) and "I'll Take You There" (1972) and which were recorded at Muscle Shoals Sound Studios. In 1973 Paul Simon's collaborated with Muscle Shoals Rhythm Section to produce the hits "Kodachrome" and "Loves Me Like a Rock." The Sound studio also produced hits for Mary MacGregor ("Torn Between Two Lovers" 1976) and the brilliant "Smoke from a Distant Fire" by Sanford-Townsend Band in the same year.

The studios were not set in the most salubrious area and more often than not artists were put up in mobile homes at the local trailer park. In 1978, the facility moved to another building in Sheffield but by the early 80s the Swampers had broken up. They had from time to time gone on tour but gradually solo projects overtook their interest. The Rhythm Section partners sold the Muscle Shoals Sound Studio in 1985 but as new technology took over and the studio finally closed.