The Kinks - From Muswell Hill to Village Green

There can’t be many pop songs that make reference to “my poor rheumatic back” or “tea and toasted, buttered currant buns”, but then again, there aren’t many pop groups like The Kinks. These lyrics from their delightfully quirky “Autumn Almanac”, released in 1967, typify the quintessentially English perspective, humour and appeal of the group that dominated the charts throughout the 1960s.


Fifty years ago The Kinks — decked out in their red hunting jackets, frilly shirts and Chelsea boots — stormed to the top of the charts with “You Really Got Me”. It was an anthem for the teenage Ready Steady Go! generation, one that defined the attitude, dynamism and energy of youth. With its edgy and powerful guitar riff the song, written by the group’s lead singer Ray Davies has, like The Kinks themselves, become legendary. 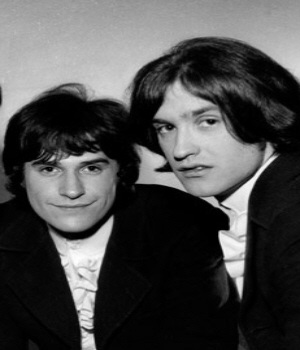 The story of The Kinks centres on two brothers — Ray and Dave Davies — who grew up in Fortis Green, Muswell Hill, in a solidly working-class background. Their parents Fred and Annie had six daughters before Ray was born in 1944 followed by Dave three years later. Music was always important in the Davies family with sing-songs around the piano and listening to records by the likes of Al Bowlly, Bing Crosby and Fats Waller. Father, Fred, played the banjo and was a big fan of music hall while mother, Annie, loved to sing.

In terms of characters, the brothers couldn’t be more different: Ray was the introvert and quiet one, whereas Dave was gregarious and outgoing. The only things they had in common — apart from their family ties — were a dislike of school and an enthusiasm for music. Both boys had guitars at an early age and Ray had been taught to play the piano. Aged just 11 and 14 they started playing together at local venues as The Kelly Brothers. As their appearances increased, so did their popularity.

By the early 1960s things were moving swiftly for the band. With Dave (lead guitar) and Ray (rhythm) sharing the vocals, they were joined by Peter Quaife (bass) and, later on, Mick Avory (drums and percussion) would complete the line-up. But before this, they went through several name changes — including The Ray Davies Quartet, The Ramrods, The Boll-Weevils and The Ravens — and met record producer Shel Talmy. Eventually known as The Kinks, they were signed by Pye Records. But, if they thought they had arrived they were mistaken. Their first two releases —“Long Tall Sally” and “You Still Want Me” — sank without trace. With their record company poised to end their contract if their next single didn’t make it The Kinks were under pressure.

Thankfully, “You Really Got Me” made it a case of third time lucky! After their first number one hit came “All Day and All of the Night” (1964), and the group maintained their chart presence in 1965 with “Tired of Waiting for You”, “Everybody’s Gonna Be Happy”, “Set Me Free”, “See My Friends” and “Till the End of the Day”.

Exciting though these early releases are, it is The Kinks’ later work that particularly resonates with me and this is because of the genius of songwriter Ray Davies in chronicling the essence of England and Englishness. With wit, poetic irony and whimsical charm he paints a series of musical portraits depicting people, places and life in vivid detail. You can see evidence of his artist’s eye here; he studied at Hornsey Art College before pursuing his music career full time.

In the second half of the 1960s The Kinks’ songs have a softer sound while the lyrics weave some great stories. At times you can’t help but wonder if it’s the same group...until you hear Ray’s distinctive voice. In 1966 he gave us “Dedicated Follower of Fashion” which, sung in a gently mocking upper-class voice, was a wry comment on those fashionable folk who frequented London’s boutiques and paraded round Carnaby Street in all their finery. This was followed, in June that year, by “Sunny Afternoon” a humorous lament on taxation from a wealthy, but lazy individual, who is facing up to losing his “life of luxury”. By contrast, “Dead End Street”, released three months later, is an almost Dickensian, domestic vignette of the lives of the debt-ridden unemployed who face grim prospects.

Anyone watching the closing ceremony of the 2012 London Olympic Games might recall Ray singing thegroup’s May 1967 hit “Waterloo Sunset”. What could be more fitting than this affectionate tribute to the Thames and the capital city, which, as the song relates, are the backdrop to the romance between “Terry and Julie”? Written at a time when so many groups from Liverpool were influenced by their home city, this is a wonderful, rhapsodic piece in praise of The Kinks’ birthplace.

The seasons and English weather provided Ray with the inspiration for “Autumn Almanac”. With its poetic opening line of “From the dew-soaked hedge creeps a crawly caterpillar” and descriptions of “leaves of a musty-coloured yellow” you find yourself instantly transported to that misty season with a definite nip in the air and thoughts of Bonfire Night and toffee apples. 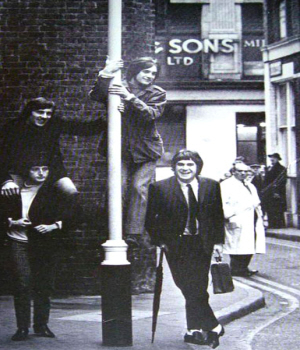 Listen to all these songs and as well as being captivated by the imagery of the lyrics you can hear echoes of music hall, folk, and rhythm and blues. Each is a marvellously observed composition that has humour, pathos, cynicism, affection and satire. The everyday and exceptional, the grim and the glorious are all glimpsed in these superb songs.

The lyrics offer a telling social commentary on the times. They were written in a decade of great change, yet it is comforting because they bring with them a welcome dose of nostalgia, traditions and the notion of simply being English. Perhaps nowhere is this better demonstrated than in the group’s 1968 album entitled The Village Green Preservation Society. This is a perfect musical celebration of the old England, chronicled in classic Davies fashion. The title song is a cheery, rousing cry to protect such English icons as Sherlock Holmes, draught beer, Mrs. Mopp, little shops, china cups and strawberry jam.

There is a heart-warming quality to this collection of 15 songs, which sing in praise of “the old ways”, steam trains, idyllic landscapes, rural communities and the characters who inhabit them, yet somehow it seems out-of-step with the Swinging Sixties. That could be one of the reasons that it wasn’t a great success on its first release, but since then it has been rediscovered and accorded the recognition it so richly deserves.

The next album, released in 1969, took a similar glance to bygone days: Arthur — The Decline and Fall of the British Empire focuses on an English family about to emigrate to Australia and features song titles including “Mr. Churchill Says”, “She’s Bought a Hat Like Princess Marina” and “Yes Sir, No Sir”. By the start of the 1970s, Peter Quaife had left the group, but The Kinks continued recording and touring; the Davies brothers had their well-documented disagreements, and American audiences finally got to see the group perform following the ending of a four-year dispute with a musician’s union.

Despite changes to the original line up, The Kinks were going strong until the mid-1990s, and even when the group paused for breath, Ray and Dave were still involved with individual projects. Many musicians have credited the band with inspiring them and there have even been rumours that there might be a reunion for the 50th anniversary of “You Really Got Me”, but as Ray admitted in a recent BBC interview there would have to be “new material” and the group are “unpredictable”.

One thing is certain about them though: more than any other band The Kinks succeeded in capturing Englishness in all its glory. Their songs conjure up an affectionate, kaleidoscopic panorama of England, which is pure magic.

Last year, at the Cheltenham Festival of Literature, Ray Davies was interviewed by broadcaster Paul Gambaccini and he referred to the English love of trivia, citing things like tea, jam and muffins. He then added with a smile: “We should be proud of that.” Many in the audience — me included — would echo his sentiments.