While it’s somewhat incongruous to imagine a Beatle aged 70, 2010 indeed marks the seven decades since John Winston Ono Lennon first saw daylight. Things have already got off to a quick start; Sam Taylor-Wood’s critically applauded “Nowhere Boy” has done brisk business in these first few days of the year, while a host of documentaries will no doubt emerge on and around October 9th to celebrate Lennon’s auspicious birthday. To all intents and purposes, “Nowhere Boy” was a smart move, with Lennon’s childhood undeniably the only element of his life not entirely dissected over the years.
While the film might raise a few eyebrows for the implied fascination John had for his mother Julia, it might come as some surprise that Lennon let slip some hugely controversial titbits regarding their relationship shortly before he died. While only in his late 30’s, Lennon had become hugely nostalgic for his Liverpool past and was beginning to piece together his formative years on paper and on tape. Despite the resolution, these were mostly fragmentary and presumably only for his own benefit.

Lennon’s death in December 1980 caused a fall-out in many senses of the word. Members of the Lennon-Ono household were less than loyal, and proved their colours by leaving the Dakota building with very personal items from their previous employers. Some of these items, notably a clutch of audio tapes, made their way on the bootleg circuit, which despite the illegality of their acquisition were nonetheless fascinating. Also part of this illicit cache was one of John’s audio diaries, which considering its content, was kept closely to the chest of a few collectors. As these things do, the tape eventually seeped out, forming the basis for controversial books by the likes of Geoffrey Guilliano and Albert Goldman. In such slippery hands, the tape soon found a broader circle. Seeing that “Nowhere Boy” looks deeply at Lennon’s unusual relationship with his mother, I am fairly convinced that the researchers must have had access to the audio diary. Listening to it today, it makes for extraordinary listening; especially knowing that within the year he would be shot dead by an assassin’s bullet. The text below is all that is known to exist of the tape. For whose benefit it was made, no one really knows, and yet like many of the interviews John made prior to his death, he was in a reflective mood. There’s plenty of evidence that he was tormented by his competitive demons and by the spectre of Paul McCartney, and yet the warmth he expels when he talks about Liverpool is palpable.

How terribly sad he never got to revisit his past in person.

“Fifth of September, 1979. Take 1 in the ongoing life story of John Winston Ono Lennon. Talk about 9 Newcastle Road, because that's the first place I remember. And it's a good way to start. Red brick. Front room. Never used. Always curtains drawn. Picture of a horse and carriage on the wall, which ended up at nanny's place. Aunt Ann, who's still living in Rockferry, Cheshire. Then she sold it. The first thing I remember is a nightmare. There was only three bedrooms upstairs, one in the front on the street, one in the back and one tinnie little room in the middle. This is boring, I can't be bothered doing it. Let's think of something else.

Well, I was listening to the radio and Dylan's new single or album, whatever the hell it is, came on...about "everybody's got to get served"? I mean, what was it? Every..."You've Got to Serve Someone"..."You've Got to Serve Somebody." So, he wants to be a waiter now. He wants to be a waiter for Christ. The backing was mediocre by Jerry Wexler, and the singing was really pathetic and the words were just embarrassing.

So, here we sit, watching the might Dylan and the mighty McCartney and the mighty Jagger slide down the mountain, blood and mud in their nails. Well, that's the way the world is, ha ha ha, that's the way the world is, oh yes. The difference between now and a couple of years back is that whenever there was a new thing out by any of the aforesaid, I used to feel a sense of panic and competition. And now, I just feel like, even the last few months it's changed. I would send out for their albums or something just to hear it. There doesn't seem any point now.

Let's take a break. How do we break? Just put it off. …(TAPE TURNED OFF) 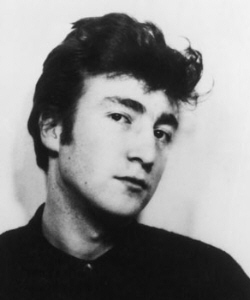 I read Truman Capote's interview with himself in this week's or month's, whatever, “Interview” magazine. And it wasn't bad, but it wasn't any better than the one I did two years ago. Although at the time I thought I had originated it, but somebody told me Bernard Shaw had done it. I liked that remark some woman made about Bernard Shaw that his brains had gone to his head.

(SOUND OF BAGPIPE MUSIC IN THE BACKGROUND)

Well, of course the bagpipes got me right back to Edinburgh, which is one of my favourite dreams. And Edinburgh Festival and the Tattoo in the castle and all these bands of the world and armies would come and march and play. And the favourites...I think they were the Americans that swung like shit, apart from actually the Scots, who were really the favourites. And I always remember feeling very emotional about it. Especially when they did the bit at the end where they put all the lights out and there's just one guy playing the bagpipes. Lit by a lone spotlight. Och-eye. Well, in 1981 I'll take Sean there, because that's a good year to go. I always felt free in Scotland. It's probably the same feeling I get in Japan actually. It's the feeling of being in a foreign country and therefore you're not, you don't belong to the...you don't have to deal with the social mores so much. Free from everything. It's easier to be yourself in a foreign country. I think that's why so many people go crackers, and they get on holidays in those places. The freedom's too much for them. Well, it's easier to think than talk.

I was just remembering the time I had my hand on my mother's tit in Number 1 Blomfield Road, in...off Mather Avenue, near Garston. It's when I was about 14. I took the day off school, I was always doing that and hanging out in her house. We were lying on the bed and I was thinking, I wonder if I should doing anything else, you know. And it was a strange moment, because I actually had the hots, as they say, for some rather lower-class female that lived on the opposite side of the road. But I always think whether I should have done it, presuming she would have allowed it.

The thing I wanted to add about McCartney, Dylan, Jagger, et al., is that they're all company men in various disguises. But basically company men. Forgetting the singing dwarf Mr. Simon (Paul).

Oh, by the way, mother was wearing a black angora short-sleeved, round-necked sweater. Not too fluffy, maybe it was the other stuff, Cashmere. That's it, black Cashmere. Soft wool anyway. And I believe that tight, dark, green, yellow, mottled skirt. Hey ho. I also remember seeing her going down on Twitchy, otherwise known as Robert Dykins. Dykins...D-Y-K-I-N-S. Her Bobby Dykins, her second husband. I don't know if she ever married him or not. She was under the bedsheets and I wandered into the room, because I was staying there. The same period, 14 on, 13 on, whatever. And I can't remember exactly what I felt, shock I know that. But because I was already probably into it myself, I probably wasn't that shocked. It was the idea of going down on him I think. Sleazy little waiter with the nervous cough and the thinning margarine-coated hair. He used to always push his hand in the margarine or the butter, it was usually margarine, and grease his hair with it before he left. He used to keep his tips in a big tin on top of a cupboard in the kitchen where I used to always steal them. And I believe mother got the blame. That's the least they could do for me.

I'm sitting here waiting to be taken out to view yet another group of houses for our country retreat. This endless search for Scotland outside of New York, within an hour of New York. Well now I've given up Scotland and the ocean, I'm settling for some grass and a tree.

I read somewhere, some guy saying that, you know, about the sexual fantasies and urges that he had over his life, when he was twenty, and then when he was thirty he thought they would cool down a bit. And then when he got in his forties, he thought they'd cool down and they didn't. And he went on, sixties, seventies, until he was still dribbling on in his mind when he couldn't possibly do anything about it, apparently. So that rather...not depressed, but I mean, I just thought, Shit. Because I was always waiting for them to lessen. But I suppose it's going to go on forever. Well forever is a bit too strong a word there. Let's say, go on until you leave this body anyway. It's hope. Maybe the game is to get...conquer it as they say before you leave, otherwise you come back for more, and then who just wants to come back just to come? Or maybe I read it in the Capote thing, I'll check that out.

Well, here we are. Aged thirty-nine, looking out of my hotel window, wondering whether to jump out or get back in bed. So, I got back in bed.(Laughs)