Animal Farm : a review of "The Lobster" 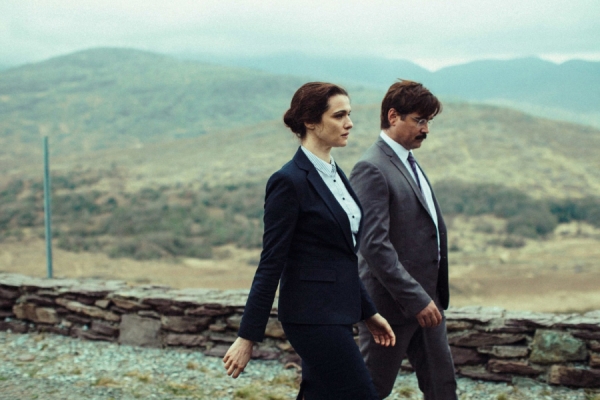 Dear readers, at this time I want for you to take a journey back into your movie memories and think back to any time in your lives when you have exited a film feeling completely transformed or feeling as if your senses have been so profoundly altered that the world looks different than when you first went into the movie theater.

The images that you have witnessed have riveted themselves to your brain. You can instantly recall not only the images but the feelings you had when you saw them for the first time. It is the type of movie that ceases to function as solely a movie--even a great one. It s when a movie becomes and experience, where the artistic vision of the filmmaker is so triumphantly complete and uncompromising that you realize that you have entered a bold new world.

At this time, I wish to turn your attention to "The Lobster," Director Yorgos Lanthimos' debut English language feature film as it is the shining example of precisely the type of film...or much better yet, the experience, that I have just described. As of this writing, "The Lobster" is the best film that I have seen in 2016 and I woud be hard pressed to think that I will see another film this year that equals its towering level of artistry and audacity. To delve even further, I also feel that "The Lobster" is one of the very best films that I have seen within these last ten years. 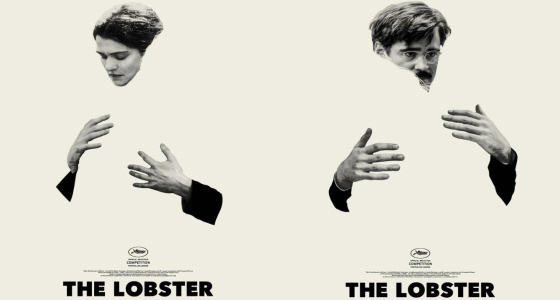 Yorgos Lanthimos' "The Lobster" is a film of such a rare class and breed, that it firmly sits alongside some other features that superbly rattled my cages and shook me to my core over the recent years, like Charlie Kaufman's "Synecdoche, New York" (2008). Frankly, and please do forgive the slight vulgarity, but this film kicked my ass--precisely the only words that I was even able to utter to myself once I was finally able to leave the theater and begin my drive back home. In fact, my mind returned me to t hose moments way back in high school when I exited Chicago's Music Box Theater after viewing Terry Gilliam's "Brazil" (1985) for the very first time. Yes, "The Lobster" is that kind of a movie.

Granted, "The Lobster" is not a film designed for the masses and nor should it be. This is a polarizing feature that is designed to be discussed and debated over passionately in either amazement, disgust, confusion or any combined emotions and judgement. And therefore, this level of discourse that is bound to occur once you see the film for yourselves, is exactly what should be expected when confronted with an undeniable work of art or at least, a filmmaker's statement of his/her artistic intent and exploration. Yet remember, one is unable to join the conversation unless one views this unique film and as if you have not been able to gather already, I am passionately urging you to head out and see "The Lobster" as soon as possible.

In the interest of keeping the full experience of "The Lobster" as pure and as untainted as possible, I will keep the plot description to as much as you would gather from the film's trailer. Set in a near future dystopian society, "The Lobster" stars Colin Farrell (in one of his finest and most committed performances to date) as David, a newly unmarried man who leaves his home in The City to check into The Hotel, an establishment where single people are given 45 days to find a lifetime romantic partner yet if they fail to do so within the allotted time, they will be transformed into the animal of their choosing, and in David's case, he decides upon a lobster.

Now, if you are scratching your heads with that description, believe me, I was doing so just as well when I first happened to see the trailers. Being transformed into animals? Was this metaphorical or literal? To know for certain you do need to see the film as I do not wish to spoil but the result of this experience was one that was chillingly disturbing as well as existentially frightening. 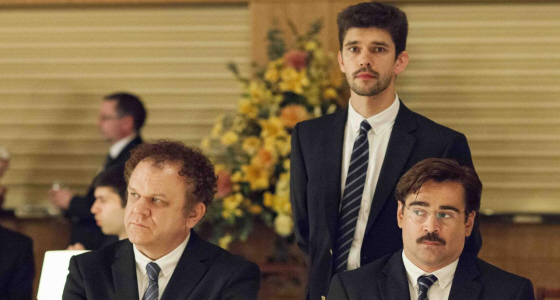 What I do feel comfortable sharing with you is that "The Lobster" essentially functions as a pitch black satire/grim science fiction oddity that explores the nature of relationships in the 21st century, much like Spike Jonze's outstanding "Her" (2013)--most specifically, loneliness and the societal constructs about single vs. married people and how those constructs pit one against the other while also creating demands and ideals in both situations so impossible that people would not only be unable to live up to them, any sense of individuality or human empathy are doomed to be crushed by the Kafkaesque Hotel staff and management as well as the band of renegade "Loners" hiding in the woods and finally, the Orwellian nature of The City itself.

In Latinos' dark vision, "The Lobster" presents a world where bisexuality is no longer a viable sexual choice, masturbation is illegal and relationships are formulated solely through some sort of matched physical ailment such as a limp, a lisp, a spontaneously bleeding nose or imperfect vision and through nothing relating to the content of one' character or humanity. For the staff of The Hotel, singledom for males represents a life doomed to die alone after choking upon a meal and for women, the single life represents an existence where she is doomed to be raped unless she is perfectly matched with a man.

Life with The Loners is no less harrowing as no signs of human attraction between each other are allowed whatsoever unless one risks severe punishment. And the two factions are indeed pitted against each other in wholly barbaric fashions also designed to wrestle any sense of humanity out of the equation, therefore making all of us nothing more than animals all engaged in a soul extinguishing pseudo-romantic survival of the fittest and all leading to a shattering climax in which even the adage of "love is blind" is brutally challenged. 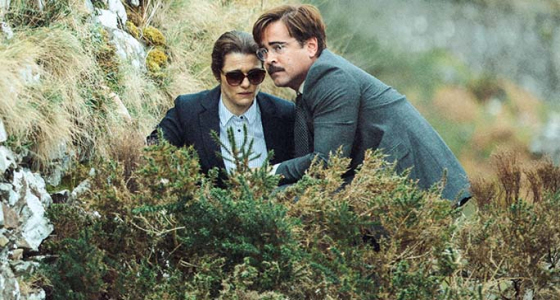 Lanthimos also creates a palpable existential urgency as he provides for us the concept of meeting your maker and knowing precisely the date when your last day will occur. What would you do in those circumstances? Fight, flight or accept?

And with all of those themes, "The Lobster" is being promoted as a...comedy.

As I have been going about my business and crowing about this film to friends about my fair city, I have been asked if the film was indeed "funny." Well...that is if you consider something like Stanley Kubrick's "A Clockwork Orange" (1971) a comedy. There are mighty Kubrick-ian undertones within Lathinos' aesthetic and presentation. The meticulously constructed and framed visual perspectives, the repetitive classical music that grows more sinister when heard on the soundtrack, the cold, almost detached atmospherics, the uncompromising to nearly impenetrable vision.

And yet, it is somehow playful. I did laugh in places. But, this film is not "funny" like your mainstream comedy by any means. "The Lobster" is nightmare comedy, filled with starkly grim, gallows humor that functions as existential quicksand. The clipped, deadpan vocal delivery of the dialogue which makes everyone sound robotic is not some sort of indie film construct of that self-congratulatory quirkiness that I often rally against. It is entirely purposeful as the characters that exist within this universe all live within a specific space and time where the honesty and fragility of their emotion as and personalities do not comply with society's new rules and to elicit otherwise would be life altering. I guess, think of it like this: "The Lobster" is sort of like Wes Anderson's Grand Budapest Hotel merged with Kubrick's Overlook Hotel from "The Shining" (1980) where one's final destination, should they not find a life partner, is a room straight out of Kevin Smith's "Tusk" (2014)--and save for one short sequence, all without any graphic on-screen violence. 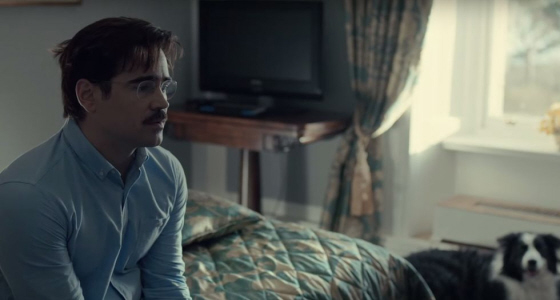 Even with everything that occurs within a film this macabre, Lanthimos also finds comparable room to display some magic, especially every single time that we are witness to an animal. The sight makes you double take for a moment or two and once leaving the theater, animals certainly do carry a certain extra level of presence, where you wonder if there is another layer to their already full personalities that allow us to make these connections with each other.

Yorgos Lanthimos's "The Lobster" is a one-of-a-kind cinematic experience that I am urging you to step outside of your comfort zones to witness upon the big screen. All of the sequels and reboots aren't going anywhere but it is films like these that are really at risk of falling into obscurity. No, it is not meant to be a box office smash but I also believe that it should not be relegated in the corners of the quirky cult film either. To me, Lanthimos has created a work of unquestionable greatness that demands your attention and regard. You may love it as I did or you may loathe it powerfully, and that is purely fine as this is exactly the type of film that wants for you to not view it passively and then forget, but to engage with it, tussle with it, allow it to seep into your minds and emotions to force a reaction and therefore, a response.

"The Lobster" is fearless cinema and again, it is far and away the finest, boldest, bravest, most powerful film that I have seen yet in 2016.

Scott Powhatan Collins was born and raised in Chicago, IL and is a current resident of Madison, WI .He is a lifelong enthusiast of music, books and films. Hisbrain is filled with DJ dreams, filmmaking fantasies, literary luxuries and all manner of useless information. He chronicles his thoughts and reviews on his two blog sites Synesthesia (http://www savagejukebox.blogspot.co.uk) and Savage Cinema (http://wwwspcsavage.blogspot.co.uk), and is always on the lookout for the next piece of art to blow his mind and capture his heart. –