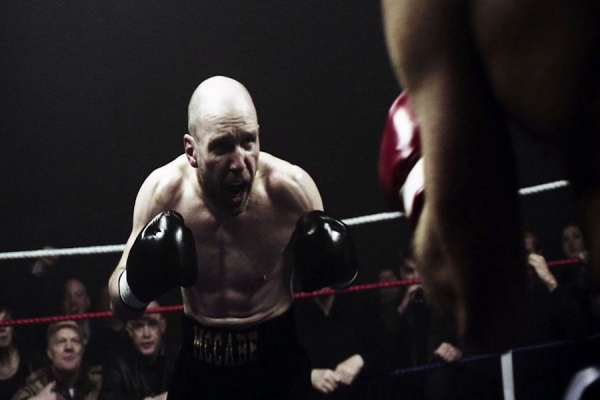 Using sport as a way to better one’s personal circumstances; showing an underdog story of hope and triumph over diversity. Jawbone is a fine addition to the genre, which packs a punch from start to finish.

‘Jawbone’ follows the story of Jimmy McCabe. (played by Johnny Harris who also wrote the film). Jimmy has hit rock bottom in his life, a broken soul in his early 40’s, trying to battle an eviction on the childhood home he lived in with his late mother, as well as an addiction to alcohol.

Jimmy had been described as a talented, undefeated boxer, “a young man who is clearly someone to watch for the future.” After winning a junior boxing contest at the age of 16. “A lovely boy who always had a big smile, being very polite and still is.” (As described by Bill, Jimmy’s friend and former boxing trainer played by Ray Winstone). Jimmy is being evicted because his house is on an estate which is to be demolished. After finding himself evicted, Jimmy seeks solace and shelter in his former boxing club, Union Street, as well as wanting to train again in order to get back to his boxing prime. At first Jimmy finds training difficult but is very determined. Jimmy soon finds himself in the company of an unlicensed boxing promoter and former associate Joe (played by Ian McShane), who saw great potential in Jimmy. Joe offers Jimmy an unlicensed boxing match up north with some young, psychotic pretender. Jimmy accepts the offer and begins to train with the help of Eddie (played by Michael Smiley) as well as knocking heads with him along the way at the Union Street Boxing Club, and running the streets of London in the early hours.

Jawbone’s soundtrack and sound design perfectly complement the film, written and performed by legend and icon Paul Weller. Jawbone also marks the first soundtrack for Weller and is absolutely superb. The vocals on acoustic of the track ‘The Ballad of Jimmy McCabe, really give an essence of the heart of the film as well as other tracks included in the film.

Jawbone also marks the first feature film to be directed by Thomas Napper, who does a brilliant job, making both a sports film as well as a poignant British drama, which leaves the audience with a feeling of hope. It will be interesting to see what Napper directs next as a follow up.

Jawbone is a triumph of British film making and not to be missed.