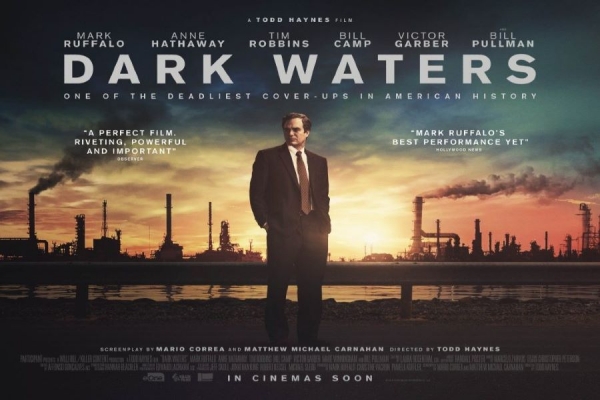 This is a Jack the Giant Killer movie based on a New York Times article, ‘The Lawyer who became DuPont's Worst Nightmare,’ by Nathaniel Rich. Cincinnati corporate defense lawyer, Robert Bilott (Mark Ruffalo),

is asked to help an acquaintance of his grandmother which leads to him taking on the megalithic DuPont in a class action to safeguard people who may have been contaminated by industrial waste over many years. Similar to Class Action (1991) , A Civil Action (1998), Erin Brockovich (2000), and other like movies, this is a harrowing tale of corporate greed and complicities. Against his better judgment, Robert’s ethically minded boss Tom Terp (Tim Robbins) allows him to represent the West Virginian farmer (Bill Camp), and at great personal cost to his health and family, Bilott dogged persistence and hunger for the truth forces him to fight and eventually have his day in court.

Mark Ruffalo on-screen bares a close physical resemblance to Bob Odenkirk’s Jimmy McGill character in Better Call Saul which helped hold my attention through some of the more disturbing scenes. At two hours long, make sure you get to the loo before the start, as you do not want to miss anything in this top-line, fact-based movie.