There is no doubt that Cathy Gale helped change the perception of women on British television forever. "When I started, men were still of the opinion that women would always be seen as the weaker sex due to their lack of strength. I was the first woman to be seen defending herself and so illustrated that this was no longer the case. Despite being glamorous and witty, Cathy was also Steed's intellectual equal.


I think her character gave heart to many women at the time. Cathy Gale was a fantasy woman - but there was an awful lot of me in her. I liked her because she was cool and determined and unsentimental, and she never gave up. She could take on a man on his own terms and go all out to win; yet she managed to stay sexy. She was a tantalising mixture - faintly male and very female." 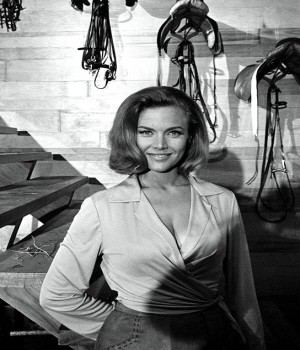 Honor as Pussy Galore in 'Goldfinger.'Honor's contract for the series was due to expire on 21st March, 1964 and as that date approached she had to make a tough decision. "I didn't want to be permanently typecast as an offbeat sex symbol in black leather and boots." But at the same time she didn't want to return to the conventional English rose roles she had been cast in previously. Then-a couple of months before the vital date-there came an offer that was to make up her mind. The offer was to play a character called Pussy Galore in the next James Bond movie; Goldfinger.

"I was already a James Bond fan but I asked to read Goldfinger before taking the part and by the time I had read it, I was convinced it was absolutely me!"

The films co-producer Albert R Broccoli, who had noted her success in The Avengers also thought she was perfectly cast. "The Brits would love her because they knew her as Mrs Gale, the Yanks would like her because she was so good - it was a perfect combination."

Although gone from The Avengers, she was not forgotten. In a 1965 episode, titled Too Many Christmas Trees, John Steed received a Christmas card from Cathy Gale. "A card from Mrs Gale!" Steed exclaimed in delight. Then, reading the inscription, he said, (in a reference to the 'Bond' movie), "Whatever can she be doing at Fort Knox...?".

Some years later, Honor reflected on the fact that her decision to leave The Avengers might have come a little too soon. "I walked away at the wrong moment. They were just going from black and white to colour; they were starting to get real film money."

Her popularity in the high-profile Bond movie should have led to better films, but it didn't, and for the most part the only offers that came in were for low-level melodrama and routine adventures. So Honor returned to the stage, and received rave reviews, as a blind heroine in the thriller Wait Until Dark

"Playing the part of a blind woman was an enormous challenge, because it wasn't enough to give the impression of blindness. Technically it creates a lot of problems because you are acting in a vacuum." She said. "It is a strange experience to cut yourself off from any communication by sight with the other actors."

Her second marriage, to actor Maurice Kaufmann (in 1961) led to the adoption of two children, Carlotta (Lottie) in 1968 and Barnaby in 1969. "We waited a long time before we decided to adopt simply because we couldn't believe we couldn't actually make a baby," Honor was quoted as saying in 1968. That same year Honor appeared in an ABC Armchair Theatre production (Recount) in which she played the role of a woman who discovers she is pregnant in middle age. Her marriage to Maurice Kaufman ended in divorce in 1975 but Honor never remarried. Following that, TV appearances became few and far between, and although Honor kept working in film and theatre, it wasn't until 1981 that she was seen in anything like a regular role on British television when she appeared as Veronica Barton in five episodes of the sitcom Never The Twain.

In 1986 Honor also returned, briefly, to the world of 'cult' TV when she appeared in four episodes of the Doctor Who story Terror of the Vervoids from The Trial of a Time Lord season. It was another four years before she returned to play a regular starring role as the sexy grandmother Laura West in the hit sitcom The Upper Hand, a British version of the US series Who's The Boss? In 1995 Honor was chosen by 'Empire' magazine as one of the 100 Sexiest Stars in film history, coming in at number 51. After being asked her secrets of youth many, many times, she wrote a book in 1997, 'How to Look & Feel Half Your Age for the Rest of Your Life.'

The Lib Dem-supporting former Avenger has long been involved with the Fairtrade Foundation, a British organization that offers a "Fairtrade" mark for products grown or manufactured in the third world, if the importers can certify that low-level foreign workers received reasonable wages and fair treatment. "Most of the Bond girls have been bimbos." She said. "I have never been a bimbo." She turned down a CBE in 2002 because she claimed that to have accepted it would have made her a hypocrite as she is also a member of Republic, The Campaign for an Elected Head of State. "We're supposed to be a democracy and we, quite shamefully, are not," she said. However, she made it quite clear that she never sought publicity for refusing the 'honour'.

"I don't know how that story got out, but it did. I never told anyone about it." 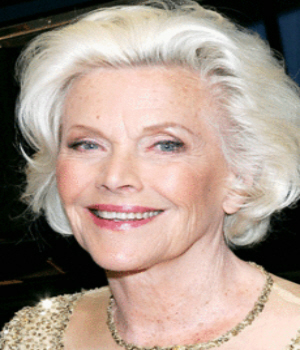 Honor Blackman has continued to grace the small screen with guest appearances in a number of established series', the most famous of which was Coronation Street (2004) as the flirtatious pensioner Rula Romanoff. "I was terribly surprised. I never thought I'd be in something like this, and I never thought they would ask me," she said. "When I read the script I thought it was so much fun, and it's the best soap in the country. It is so iconic." And as she approached the grand age of eighty there was no hint of her slowing down. She did a one-woman show called Word of Honor and in 2007 she took over from Sheila Hancock the role of Fraulein Schneider in Cabaret at the Lyric Theatre in London's West End. It was her first West End role for 20 years and she found it exhilarating. "When I put my foot on the stage, I come alive and that's it. It's always a bang. It's thrilling, I think, theatre. Thrilling." And because of that thrill there has never been a thought of retiring. "I shall retire when I'm made to retire." She said. "I mean when nobody offers me a job or my memory goes or I can't walk or when I die! I mean we're so lucky, it's not like going into the office, it's so varied and you don't know what is round the corner."