The Genesis of British Rock: The Coffee Clubs

Coffee Clubs had their origin in the old Coffee Houses introduced to England in 1652.

The coffee club became a male preserve with only serving women encouraged and coffee drinkers, usually the inteligencia, found coffee houses ideal meeting places to do business (often political) and play cards. Much anti-establishment behaviour originated from the new coffee houses and regent Charles II (1630 - 1685) tried to ban them but he was unsuccessful. By the 18th century, London coffee houses preceded many gentlemen's clubs and once the aristocracy had moved out the coffee clubs attracted the middle classes.

By the 20th century coffee houses were popular temperance attractions which were associated with jazz in the US. In the UK and Australia, Coffee Clubs became Coffee Bars and were inseparable from Italian Americana, serving espresso coffee and housing the latest in technology, jukeboxes. They became the Mecca for young teenagers unable to get into the pub. 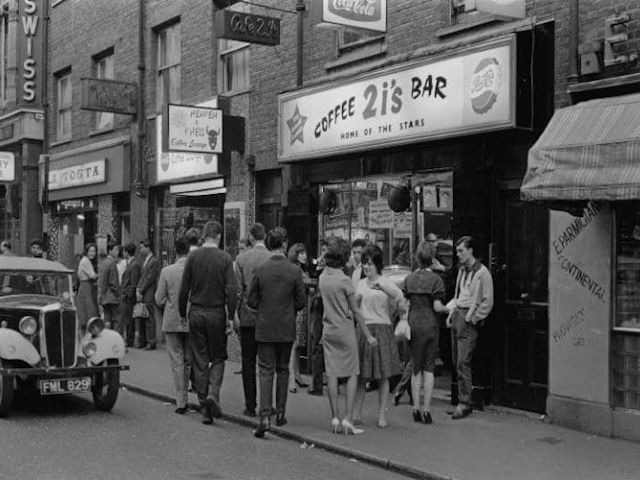 During the 50s the most influential coffee bar in London was the 2i's Coffee Bar, owned by two Australians. In the basement at 59 Old Compton Street, Soho, the coffee bar had live music which featured many of the up and coming new Rock’n’Rollers, including Cliff and the Drifters, Tommy Steele and Adam Faith among many others. One of the talents was a chap who was going to be invited to join Hank and Bruce in the Drifters but decided to follow a solo career instead. His name was Tony Sheridan who later helped teach the Beatles how to rock.

Sadly all that remains at the original site of the 2Is is a plaque unveiled in 2006. The premises are now the Boulevard Bar and Dining Room with the original basement a lobby area for storage. You can still see what the original 2Is looked like in the video, Absolute Beginners otherwise the building fascia no longer exists.

In 1957, Aunty (BBC) introduced a new program for teenagers called “The Six Five Special.” It was only intended to run for six weeks but ended up an institution. Presented by Pete Murray and Jo Douglas the show initially developed an association with skiffle but also included some Rock’n’Roll and other popular singers too including Michael Holliday, the King Brothers and Jim Dale (of Carry On Films). Jim went on to write Georgie Girl and have an illustrious career on Broadway but not before he became the show’s presenter. Jim may be less well known now but was a regular in the Carry On films. In the fifties he was a mean and moody rocker.

When the young producer of the 6’5 Special was sacked, Jack Good was quickly picked up by a commercial TV station and they brought out a rival teen program called ‘Oh Boy!’ in 1958. It was recorded live and featured one song after another. Top recording artists sang together and separately and older tunes were freely mixed with the hit parade. The frenetic pace and high energy output suited the teen’s right down to the ground and the show was televised at the Hackney Empire, in front of 200 screaming teenagers. The show featured many top British vocalists including Shirley Bassey, Marty Wilde and Billy Fury. “Oh Boy’ also featured were overseas stars including The Inkspots; Conway Twitty and Brenda Lee which increased the program’s appeal to the British youth. The resident band was Lord Rockingham XI who had a couple of hits including “ Hoots Mon” and the immortal phrases “There's a moose loose aboot this hoose" and "It's a braw, bricht, moonlit nicht."

Ironically the music had no real Scottish connection (other than bagpipes at the end) but did add to teenage hip talk at the time and took its place alongside Bill Halley‘s , “see you later alligator” and ’in a while crocodile.’ The star of the Oh Boy series was Marty Wilde (Kim Wilde’s dad) who was a natural performer and came from the Larry Parnes stable of singers.


Parnes was an impresario who liked giving his singers edgy names like Marty Wilde, Tommy Steele and Vince Eager. Marty was doing well when young pretender, Cliff Richard joined the show although the two performers worked happily together Larry Parnes was uncomfortable and decided to pull Marty from the show. Needless to say Cliff took the limelight and although Marty continued to have some chart success as a cover artist, he quickly faded from the scene. Needless to say Cliff grew in popularity until he overtook his main rival Tommy Steele. Steele by this time could see the end of his career as a teen idol and quickly moved into cabaret and theatre.

There was still conscription in the UK and many of the talented performers ended up doing national service which meant by the time they were back in Civy Street, music styles had changed. One very promising act from the 2Is was Joe Brown a brilliant guitarist (left handed) with an infectious and cheeky disposition. Joe enjoyed several hits but not before becoming very good friends with Eddie Cochrane and Gene Vincent.

As the sixties progressed and the Mersey Beat replaced Rock’n’ Roll, many of the early Elvis imitators faded or moved into cabaret but one group from the 2Is café set went on to become a musical institution were The Shadows. 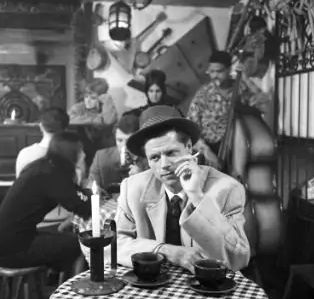 Conway Twitty
Its only make believe (1958)