After the Mods: Carnaby Street Today 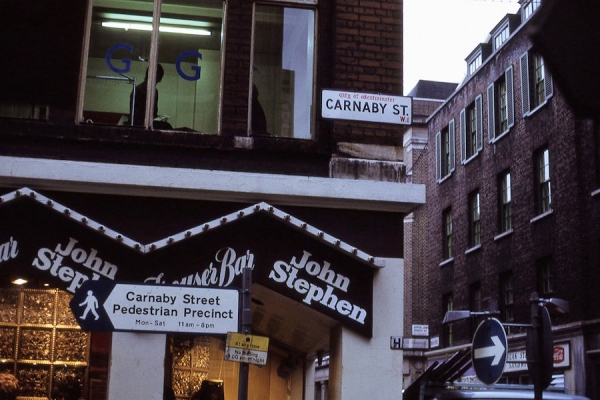 Although it’s important to enjoy and promote the artistry of the Mod era, just as it is important to celebrate the colourful lives and loves of those who drove it, sometimes it’s hard to resist a brutal examination of just how much things have changed since the days of the racing fifties and Swinging Sixties. 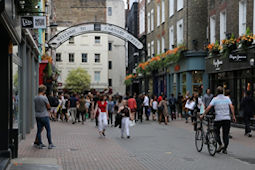 It’s now 2018 and lamenting the death of the subculture in Great Britain has become de rigueur among the Twitterati and cultural commentators of our day. When looking back over the hugely influential Mod subculture and the cultural aftershock of the movement that undoubtedly still plays a role in contemporary music, art, fashion and politics, the best way to start and finish this exploration is by looking at the epicentre of the movement. Few would doubt that the (geographical) focal point of it all is (or was) London’s Carnaby Street, a pedestrianised enclave in central Westminster that was once the hip and colourful face of Swinging London.

Rather than embarking on a howling rant about the gentrification of London and decrying the closure of the record shops, galleries and dancehalls that have long since ceased to exist, it’s better to take an upbeat look at the Carnaby Street of today, which happily pays a loving tribute to the subcultures of yore whilst maintaining a position as a formidable centre of left-field fashion and culture amidst a sea of bland 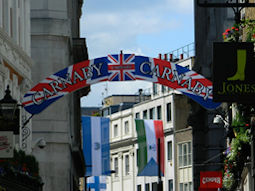 Importantly, the vibrant street culture of Carnaby is alive and well to this day and, while the biker goggles may have been replaced with BBQ Chicken and café au lait, the area still serves as a multicultural meeting point and vibrant hangout spot for locals and tourists from all walks of life. Dozens of nationalities and cuisines are represented in this small stretch of our nation’s capital city, and the fact that contemporary Carnaby is just as lively and swinging as it ever was is surely something to be celebrated. It’s definitely more a place to eat and drink the night away rather than a place to see and be seen nowadays, and you can even have a slice of Carnaby cuisine delivered straight to your doorstep - and that’s a good thing.

Of course, 21st century Carnaby has plenty more of note to offer; they hold some of the best street parties in the city, and their Pride celebrations in the summer regularly rank as one of the best ways to experience the beauty of London Pride. There are street food festivals all throughout the summer, which celebrate the more recent cultures that have made their home in the city, and the street is lined with dozens of edgy fashion boutiques that serve as a welcome nod to the street’s roots as a cultural hotspot. The West End has come a long way since the decline of the Mod movement, and the state of its geographic centre today might cause some serious angst among those who remember and took part in it, who may see it as something that’s representative of a wider cultural trend. However, it’s important to look at the positives and pay attention to how Carnaby has so carefully retained the essence of what made it what it was in the first place.