The Story of the Sonny Boy Williamson's on ZANI 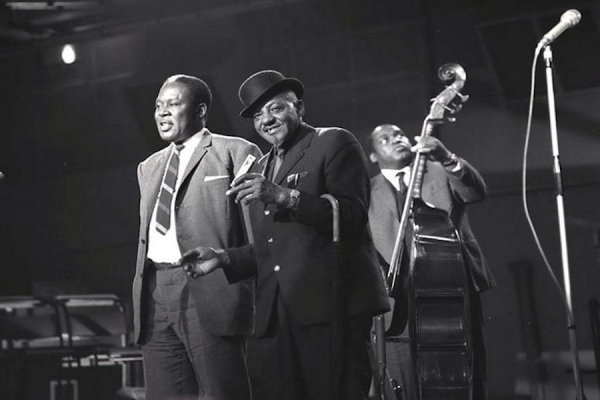 John Lee Curtis (Sonny Boy) Williamson was born near Jackson, Tennessee in 1914. He played the harmonica starting with country blues before developing a unique urban blues. Singularly he developed the harmonica as a lead instrument influencing a large number of blues harmonica performers, including Billy Boy Arnold, Junior Wells, Sonny Terry, Little Walter, and Snooky Pryor among many others.

Sonny Boy Williamson became known as "the father of modern blues harp" and recorded "Good Morning, School Girl" in 1937. The very first recording of electric blues was released on the Bluebird record label and became a major hit on the 'race records' market.

Sonny Boy Williamson played with Muddy Waters and Jimmy Rogers in the mid-1940s and both artists recorded his songs.

Sonny Boy Williamson II early life is rather an enigma but it is thought he was born Aleck Ford, the illegitimate son of Millie Ford (Miller) circa 1912. He was brought up with a strict religious background on the Sara Jones Plantation in Tallahatchie County, Mississippi. The youngest of the family he was nicknamed "Rice" although was called “Sonny” too. He took his father's name Miller and when he was in his late teens travelled around Mississippi and Arkansas playing and preaching where ever he could. During this time he jammed with Big Joe Williams, Elmore James and Robert Lockwood, Jr. (aka Robert Junior Lockwood and stepson of Robert Johnson).

He also associated with Robert Johnson during this time. "Rice" Miller had several names including Willie Williamson, Willie Miller, Little Boy Blue, The Goat and Footsie but "Rice" Miller always claimed he had been the first to use the stage name "Sonny Boy Williamson." In 1941 Miller and Lockwood were hired to play the King Biscuit Time show on radio station KFFA in Helena, Arkansas. During this time Miller appeared under the title Sonny Boy Williamson.

This may have been a deliberate attempt by the station to deceive listeners they were listening to the better known recording star, John Lee (Sonny Boy) Williamson. Many historians believe the ambiguity about "Rice" Miller's own birth date was part of the rouse to deceive. After the death of John Lee (Sonny Boy) Williamson, Miller was Sonny Boy Williamson and the King Biscuit Boys consisted of Pinetop Perkins, Joe Willie Wilkens, Peck Curtis, Robert Jr. Lockwood, and Dudlow Taylor.

Sonny Boy started his own KWEM radio show (1948 to 1950) and featured Elmore James, Houston Stackhouse, Arthur "Big Boy" Crudup, Robert Nighthawk, B. B. King and many others. Sonny Boy Williams II started recording in 1951 with Trumpet Records of Jackson, Mississippi. Four years later the company was bankrupt and taken over by Chess Records in Chicago. Sonny Boy had already built quite a fan base in the city having played in Elmore James's band.

During the Chess years (1955- 1964) he recorded over 70 songs. Sonny Boy Williamson's life becomes better documented after he comes to popular attention in the early sixties. By this time there was a resurgence of interest in American Negro (Folk) Blues and Sonny Boy features prominently as a concert performer.

Around this time he toured Europe with Muddy Waters, Howlin' Wolf, Lightnin' Hopkins, Lonnie Johnson, Sleepy John Estes, Big Joe Williams, Otis Spann and a select cast of blues legends. Sonny Boy Williamson was the acknowledged and revered star of the tour and dubbed "King of the Harmonica". He returned to UK and toured the college circuit with a very young Eric Clapton. The Yardbirds were his tour band.

During this time he met many of the would-be luminaries of the UK blues scene. He enjoyed his European fans and took to wearing a custom-made, two-tone suit with a bowler hat, matching umbrella, and an attaché case for his harmonicas. On his return to the U.S., he resumed playing the King Biscuit Time show on KFFA, and performed around Helena, Arkansas. Sonny Boy Williamson died suddenly in his sleep in 1965.

John Mayall's Bluesbreakers
Checkin' Up On My Baby (1967)