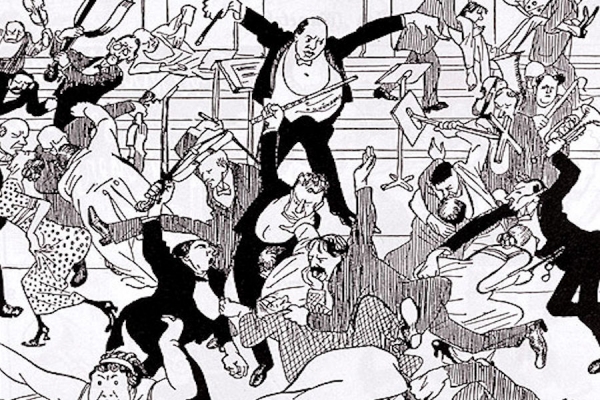 First of all, I know it’s nearly the end of February.

I wasn’t going to bother making a part 2 to my last list, which dropped towards the end of last year. There were a couple of releases I hadn’t been able to get my hands on (but which I knew I had to include), so, using an archaic method of only reviewing an album in its physical form (unless it’s download only), I had pretty much resigned myself to leaving my list bereft of a second part.

However, come February I’d acquired all the releases I’d been unable to get my hands on before New Years’ Eve, so felt it only polite to ensure that my list, which I gave the title of ‘The Sound of 2018 – End of Year Playlist Part 2’, was blessed with a sequel. I felt it was the only honest thing to do.

So here we are, for anyone who cares (assuming anyone does), here it is, in all its unexpurgated glory; the final list of the best album and EP released from July to December last year. Ladies and gentlemen….. The Sound of 2018 – End of Year Playlist Part 2.

The Mekons 77 – It Is Twice Blessed (Slow Records) (CD/LP/DL)
Grizzled Leeds Art Rockers The Mekons are back with a bang, returning with the original 1977 line-up. Reflecting the turbulent times of now, It Is Twice Blessed is their most overtly political for ages, the slogan ‘Fight Fascism’ proudly emblazoned across the front of the disc. Musically it’s a return to the guitar based New Wave of ‘The Quality of Mercy…Is Not Strnen’, burning with a politicised rage, dry humour and sense of injustice sadly lacking in much of today’s indie scene. Fans will be delighted to hear a sequel to ‘Where Were You?’ in ‘Still Waiting’.

Neneh Cherry – Broken Politics (Smalltown Supersound) (CD/LP/DL)
Neneh’s first new album since 2014’s ‘Blank Project’ has a disarmingly skeletal, naked feel to it. There is a distinctly sombre, downbeat tone throughout, the wisecracking irreverence of ‘Buffalo Stance’ seemingly dead and buried, replaced with hard-edged trip hop (‘Shot Gun Shack’) moody dub rumbling (single ‘Kong’) and gritty torch balladry (Deep Vein Thrombosis’), yet ending on a more optimistic (albeit personal) note with ‘Soldier’. Her voice is the dominant factor on a largely stripped-back recording which, although uncomfortable at times, is possibly her most engrossing work yet.

Tom Hingley Band – I Love My Job (Newmemorabilia) (CD/LP/DL)
Former Inspiral Carpets frontman Tom Hingley lets rip with a new record, containing some of his rawest works yet. ‘Toy’ and ‘Bullet’ both bring to mind The Stooges; raw, lo-fi breakneck garage anthems, balanced out with string soaked ballads like ‘Beautiful Girl’ and the anthemic Record Store Day single ‘Beggars Hand.’ Tom’s inimitable, ocean-sized vocals have lost none of their power or potency over the years, painting a thousand pictures on the intense rock of ‘White Sheep’ and the elegiac ‘Shining For Somebody Else.’

Suede – The Blue Hour (Warner Music UK) (CD/LP/DL)
Britpop’s ponciest band Suede swagger back to the music scene in typically grandiose fashion. ‘The Blue Hour’ is a concept album dealing with mankind’s destruction of the natural environment of the UK. It veers between string-soaked tracks blessed with the strings of the City of Prague Philharmonic Orchestra (‘As One’), and the glam strut singalong sleazeathons which made them household names (‘Wastelands’), the two merging together on the glorious ‘Flytipping’. Complete with a beautiful CD booklet adorned with black and white images of the English countryside, ‘The Blue Hour’ is their boldest, most ambitious statement since ‘Dog Man Star.’

She Drew The Gun – Revolution Of Mind (Skeleton Key) (CD/LP/DL)
Co-produced by Coral frontman James Skelly (and released on brother Ian’s Skeleton Key Records), the second album from Wirral-based group She Drew The Gun is an arresting affair. A glance at the provocative, eye-catching cover of a topless punk rock feminista gives you an idea of what to expect; an urging, insistent record which switches from seductive to sinister with the unnerving ease of an axe murderer. Louisa Roach is proving herself a vocal/lyrical talent to be reckoned with, expect even greater things from her fascinatingly unhinged mind soon.

Lee ‘Scratch’ Perry – The Black Album (Upsetter Records) (CD/LP/DL)
Mr. Pipecock Jackson is back and reunited with producer/mixer Daniel Boyle, last seen on 2014’s Grammy-winning ‘Back On The Controls.’ Recorded on vintage analogue equipment, ‘The Black Album’ drags you deep down into a 21st century dub underworld for 76 mins. Although it maybe lacks some of the inspired wordplay of some of Scratch’s other solo albums, ‘The Black Album’ has much to offer musically; each track is followed by a heavy duty dub mix, with Upsetters veteran Robbie Lyn contributing piano and organs throughout. At 83 years of age, Mr.Perry shows precious little evidence of slowing down.

Paul McCartney – Egypt Station (Capitol) (CD/LP/DL)
Macca’s latest work is his best since 2005’s ‘Chaos And Creation In The Backyard’. It’s clear from the striking album cover that the creative juices are flowing in plentiful supply; there’s ample evidence to suggest that this release could well open the Fab One up to a whole new clutch of fans, beyond the Beatlemaniacs and Wingsnuts. Ranging from the reflective baroque pop of ‘I Don’t Know’, the bawdy rock of ‘Come On To Me’ and the breathtaking three-part symphony of ‘Hunt You Down/Naked/C-Link’, ‘Egypt Station’ is the sound of a boundary-pushing musical eccentric back with a bang.

Yoko Ono – Warzone (Chimera Music) (CD/LP/DL)
Continuing The Beatles theme, John Lennon’s widow continues to spit in the face of redneck ‘it was the woman wot ruined ‘im’ types with impeccable precision, 85 years old and still refusing to compromise. ‘Warzone’ consists of reworkings of her back catalogue (mostly from her 1985 solo record ‘Starpeace’), as well as a surprisingly moving rendition of her late husband’s ‘Imagine.’ Her vocals are the main attraction on a stark, sparse production, reaching genuinely disquieting, terrifying heights on ‘Why’. Plus she managed to annoy Rod Liddle, a man with all the journalistic integrity of a common weasel. Mission accomplished.

Popcaan – Forever (Mixpak Records) (CD/LP/DL)
Jamaica’s rising Dancehall sensation Popcaan really hits his stride on this, his second long player. For the most part it sits at the poppier end of the genre; tracks like ‘Call Me’ recall a 21st century reboot of the Lovers Rock of Sugar Minott and Dennis Brown, with nods to roots and dub elsewhere. Darker moments surface in the hard edged social commentary of ‘Lef My Gun’ and the tense dub rattle of ‘Firm And Strong’, all of which suggest Popcaan will be here for the long run. Who knows what journeys he’ll take along the way?

The Lucid Dream – Actualisation (Holy Are You Recordings) (CD/LP/DL)
Previously best known in the rock ‘n’ roll hall of fame for members of Spooky Tooth, Camel and A1, England’s Northernmost city of Carlisle is about to receive a much-needed adrenaline shot to the arm with this, the fourth album from psych rockers The Lucid Dream. ‘Actualisation’ is a far more electronic beast to the guitar heavy space rock shenanigans of old. Hitting hard with the mutant psych- funk of ‘Ardency’, the militant 80s electro of ‘SX1000’ and the propulsive dub-funk of ‘No Sunlight Dub’, The Lucid Dream are a Hawkwind for the acid casual generation.

The Tea Street Band – Frequency (Modern Sky) (CD/LP/DL)
Scouse baggy casuals The Tea Street Band strut their way back into the music scene with a second album, signed with emerging Liverpool based record label Modern Sky. ‘Frequency’ is a gloriously retro electro-indie shuffle of a record, infused with enough attitude and experimentation to keep it from cliché, instead offering up a warped hybrid of pop (‘Only Love’), nu-rave (‘Givin’ It Back’), psych (‘Enter The Void’) and E’d up euphoria (‘Coming Up’), a ‘Screamadelica’ for the 21st century. Give me these over Springsteen’s mob any day.

Cypress Hill – Elephants On Acid (BMG) (CD/LP/DL)
West Coast hip hop veterans Cypress Hill have gone back to their roots with this wonderfully titled LP, a return to the dark, menacing fog of ‘Temples of Boom’. Gone are the special guest appearances which often diluted the impact and flow of previous records, in their place are low key, murky beats courtesy of stalwart group member DJ Muggs. Veering between the cartoonish and the callous with wicked glee, ‘Elephants on Acid’ is the sound of a bunch of men happily unmellowed by life in the Hollywood Hills.

The Assist – Lost (Self – Released) (CD/DL)
Scallydelic Walsall urchins The Assist fire on all cylinders with their second EP, a riot of baggy vibes and space age grooves, all infused with a snarling Black Country attitude. An eye-catchingly colourful cover gives a hint of the treasures contained within; the bouncy dance-pop of ‘Love’, the vocodered electro madness of ‘Exist’, the euphoric underwater psych of ‘All I Need’ and the anthemic ‘Hung Up’ all suggest that 2019 will be very kind indeed to these boys.

Sleaford Mods – Sleaford Mods EP (Rough Trade) (CD/LP/DL)
Britain’s most polarising group since The Sex Pistols hit new territory with this self-titled five track EP, a prelude to their forthcoming long player ‘Eton Alive.’ There is a world weary quality to the likes of ‘Bang Someone Out’ and the unsettling ‘Gallows Hill’, as well as the sparse, brutal ‘Stick In A Five And Go’, the ominous new wave of ‘Dregs’ and the dark electro throb of ‘Joke Shop.’ Like Suicide if they were members of a Nottingham Forest football firm.

Pharoahe Rocher – Robocop Expert (North Career Music) (DL)
An impossibly enigmatic Hip Hop producer from Liverpool (NO ONE knows who the hell he is), this nine track EP from Mr Rocher is an engrossing confusion fog of film samples, fractured beats and avant-pop sex grooves. A scratchy, itchy sound set to a dark, brooding atmosphere leads you to the conclusion that he may well be a snuff film director, or a child killer. Whatever he may be, the instrumental rap meltdown of ‘Robocop Expert’ is rarely less than riveting.