The Music of the Vietnam War 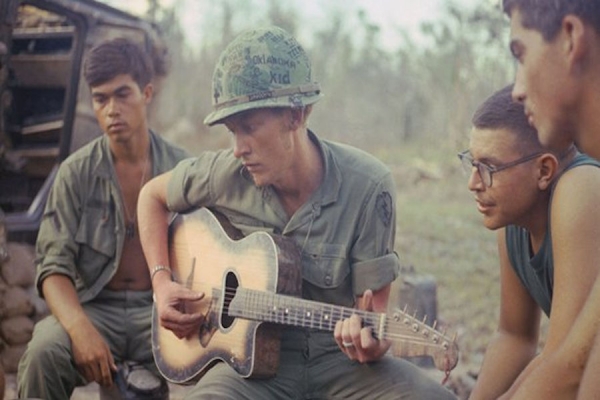 By the time of the Vietnam/American War (1955 – 1975), music was used to help soldiers deal with the complexities of war whilst keeping them in touch with each other and the life they left, back home.

The United States Armed Force operated the American Forces Network (AFN) and as the American military presence in Vietnam increased, they opened radio stations first in Saigon (Armed Forces Radio Saigon), then when the network expanded throughout South Vietnam, it became known as, American Forces Vietnam Network (AFVN) . At the height of American involvement in the war, the network served more than 500,000 fighting men and women at one time. A number of local disc jockeys helped make hour-long music programs for broadcast. The best-remembered is the program "Dawn Buster" mainly due to the sign-on slogan "Goonoo Morning, Vietnam" Sergeant Adrian Cronauer, the instigator was played by Robin Williams in the film Good Morning, Vietnam.

The last AFVN station to close was in Saigon in 1973. Broadcasting continued under civilian leadership on FM only and using the name American Radio Service (ARS). The civilian engineers were provided by Pacific Architects and Engineers (PAE). ARS stayed on the air until the Fall of Saigon in April 1975. It was to play Bing Crosby's version of Irving Berlin's "White Christmas" as a signal for Americans that the final evacuation of Saigon had begun. The Crosby version of the record could not be found so Tennessee Ernie Ford's record was played.

Music was integral to the experience of Vietnam for soldiers and citizens, and certain songs hold associations with the conflict that endure to this day. A myriad of social changes and political upheavals motivated artistic expression and this was reflected in the lyrics of many popular songs. Every soldier had their own special song that helped bring them home. By far, songs that tapped into loneliness, heartache and homesickness held a special place in the hearts of Vietnam vets. The following were popular choices with servicemen but are not in any particular order.

Any song with a lyric about going home was sure to find an audience “Detroit City”, by Bobby Bare became very popular on jukeboxes in Southeast Asia. (Sittin’ on) The Dock of the Bay by Otis Redding expressed feelings of yearning and loneliness and reminded many soldiers of the last time they saw American soil, back in San Francisco. Smokey Robinson and the Miracles , Tracks of my Tears needs no explanation. 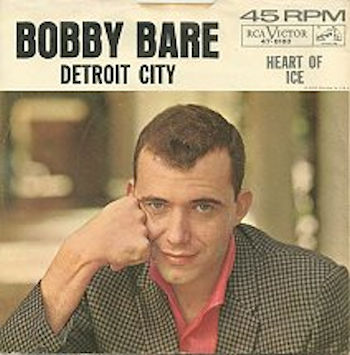 Mail call was a sacred ritual in Vietnam and love letters from home kept the dream alive of getting back to their beloved.‘Leaving on a Jet Plane,’ by Peter, Paul and Mary, was the song many families back home found brought tears to their eyes. As it reminded them of saying goodbye to their men as they boarded the planes for Vietnam. For many the song was an anthem for loss of innocence.

Vietnam was the first major conflict in which African-Americans were fully integrated, and the first conflict after the civil rights revolution of the 1950s and early ’60s. Executive Order 9981 officially desegregated the armed forces in 1948, but many units remained segregated until late 1954. Racial tensions arose and needed to be allayed in the front line. Soldiers that ate together, shared supplies, told stories and jokes, generally empathised with one another, whatever their race. Shared musical tasted helped with racial integration, and black and white soldiers formed close bonds of friendship in Vietnam. Incidents of racial tension were uncommon in the early years of the war, but following the assassination of Dr Martin Luther King (1929-1968) , they became more common with thousands of racial incidents reported in South Vietnam between 1968 and 1971. The racial situation deteriorated as the war dragged on.

The House of the Rising Sun by The Animals struck a chord with the troops in Vietnam and formed an indelible association with that conflict. The sound of the guitar of Jimi Henrix was reminiscent helicopter blades and machine gun fire, conjuring visions of hot landing zones and purple smoke grenades. His music was loved by everyone.  Creedence Clearwater Revival was another band everybody liked, and the lyrics of Fortunate Son in particular because it summarized the general feelings about rich draft dodgers.

Wherever possible many service personnel even in the midst of hell, enjoyed humourous moments and above all satire. “Chain of Fools” took on special meaning in Vietnam, when the lyrics were taken to refer to the military “chain of command.”. One out of every 10 Americans who served in Vietnam was a casualty. 58,148 were killed and 304,000 wounded out of 2.7 million who served. Amputations or crippling wounds were 300 percent higher than in World War II, and 75,000 Vietnam veterans were left severely disabled. Getting back alive was on everyone’s mind and extra importance was placed on the lyrics of ‘We Gotta Get Out of This Place.’ by The Animals, and whenever the chorus began, drunk or sober, everyone joined in as loud as he could. This was the Vietnam anthem.

The reaction to the reportage on the war daily with vision of violence, pillage and burning in print and on screen had immense effect on the populations of the US and Australia and New Zealand. Never before had the revulsions of war been so widely broadcast to civilians and they were horrified at what they saw. The Rolling Stones’ Gimme Shelter was an apocalyptic song. Which became popular with a wider counter-culture movement.

In Australia, conscription became compulsory in 1964 for 20-year-old males. The selection of conscripts was made by a sortition or lottery draw based on date of birth, and conscripts were obligated to give two years' continuous full-time service, followed by a further three years on the active reserve list. Conscription ended in December 1972. Skyhooks released "Horror Movie", which topped the charts in 1975. The lyrics specifically referred to the horrors of war and despite being banned from Australian radio, the chart success clearly demonstrated the public distaste for the War in Vietnam. 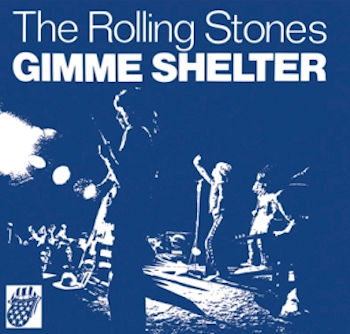 There were multiple reasons for widespread drug use in Vietnam, in part because of a counterculture Stateside, because of the ready supply of the drugs in Vietnam, and because of the breakdown in morale in the Army, where a rebellion took root.” Armed servicemen of the Vietnam War used drugs more heavily than any previous generation of enlisted U.S. troops. From heroin to amphetamines to marijuana, drugs were so commonplace. ”According to a 1971 report by the Department of Defense, 51 percent of the armed forces had smoked marijuana, 31 percent had used psychedelics, such as LSD, mescaline and psilocybin mushrooms, and an additional 28 percent had taken hard drugs, such as cocaine and heroin. In 1971, the White House implemented “Operation Golden Flow”, which mandated all servicemen subject themselves to urinalysis before boarding planes back to the United States. Should a serviceman fail to pass his drug test, he was required to stay in the country for detoxification, only to be released back to the United States upon successfully testing clean.

GI’s black humour included bitching in a way that would not get them in trouble but would keep them from insanity. Country Joe’s I Feel Like I’m Fixin to Die Rag was another example of satire . A Vet, County Joe’s song became a battle standard in the bush. Blood Sweat and Tears 'And when I die," was in a similar vein.

The movement against U.S. involvement in the Vietnam War began small–among peace activists and leftist intellectuals on college campuses in the US. After the United States started bombing North Vietnam in 1965, Anti-war marches and other protests, attracted a widening base of support over the next three years, peaking in early 1968 after the successful Tet Offensive by North Vietnamese troops proved that war’s end was nowhere in sight. The Vietnam War was costing the U.S. some $25 billion per year, and disillusionment was beginning to reach greater sections of the taxpaying public. In 1967, one of the most prominent anti-war demonstrations took place, where 100,000 protesters gathered at the Lincoln Memorial; around 30,000 of them continued in a march on the Pentagon later that night. After a brutal confrontation with the soldiers and U.S. Marshals protecting the building, hundreds of demonstrators were arrested. 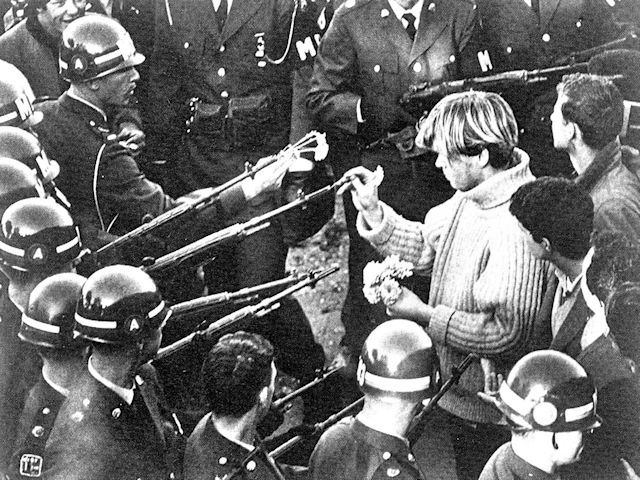 In the same year, Dr. Martin Luther King Jr. went public with his opposition to the war on moral grounds, condemning the war’s diversion of federal funds from domestic programs as well as the disproportionate number of African-American casualties in relation to the total number of soldiers killed in the war. In mid-1971, the publication of the first Pentagon Papers revealed previously confidential details about the war’s conduct causing more and more Americans to question the accountability of the U.S. government and military establishments. In response to a strong anti-war mandate, Nixon announced the effective end to U.S. involvement in Southeast Asia in January 1973. ‘War’, by Edwin Starr was released in 1970, and struck a chord with a disaffected public. It became an immediate hit, staying at #1 in the Billboard Charts for 3 weeks.

A conversation with his brother Frankie who served for three years in Vietnam, and the death of his cousin’s death in the war inspired Marvin Gaye to record ‘What’s Going On.’ Ohio,' by Crosby, Stills, Nash & Young was banned by many AM stations, Stateside, and immediately took on an anthem status. The song came as a reaction to the shooting deaths of four students at Kent State University in Kent, Ohio. The students were shot by National Guard troops sent there to quell student unrest over the Vietnam War. This marked the darkest event on the home front. Two days after the Kent State incident, police wounded four demonstrators at the University of Buffalo. Neil Young’s “Ohio,” captured the anger and frustration felt by many young people at that time. The B-side of the single was Stephen Stills’ ode to the Vietnam war’s dead, “Find the Cost of Freedom.” FM radio, then

Over 2 million Vietnamese died in the War with many of them were civilians. The "Bob Dylan of Vietnam, " was Trịnh Công Sơn , who was admired by all sides in the War. His funeral in Hanoi in 2001 was said to be the second largest in modern Vietnamese history.

Kuzmarov J. (2009)  The Myth of the Addicted Army: Vietnam and the Modern War on Drugs University of Massachusetts Press

Werner C. and Bradley D., (2015) We Gotta Get Out of This Place: The Soundtrack of the Vietnam War University of Massachusetts Press