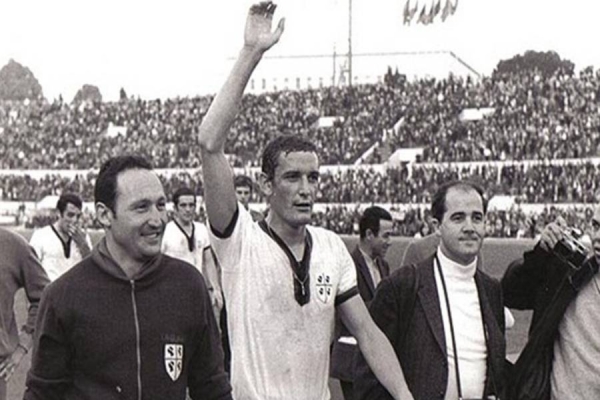 50 years ago, on the 12th April 1970, a seismic event happened in the world of Italian football. A party broke out on the beach bars along the Poetto, cars sped around deliriously honcking their horns, people jumped into fountains. At the end of every football season there are similar celebrations, but this was different – this was Cagliari.

A long time ago mainland Italy regarded Sardegna (Sardinia) as a remote backwater. Somewhere exotic to go for a seaside holiday - but never go in the mountains, that’s where the bandits are. For the Italian police the island was a form of punishment - “We can’t fire him, we’ll transfer him to Sardegna instead.”

But things started to change in the 1960s. The Aga Khan bought property on the northern Costa Smeralda, a petrol refinery opened in the south and money poured into the Island. With that, in 1964, the capital’s football team Cagliari got promoted to Italy’s top flight.

Cagliari established themselves as wily Serie A competitors, with a tight defence and a formidable attack in the form of Luigi “Gigi” Riva a young striker who had helped them win promotion, and by 1965 had won his first cap for the national side. 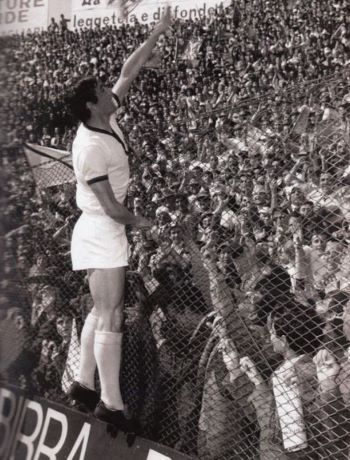 Italian football had been dominated by the big three of the north – Inter, Milan and Juventus – but the triumvirate’s grip had loosened in the 1968-69 season when Fiorentina won the league.

Finishing second, Cagliari were well poised to do something great the following season. But manager Manilo Scopigno decided to change things and pulled his transfer masterstroke. In 68-69 he had the amazing striking partnership of Boninsegna-Riva. He figured that having two glory hunting goleadors was surplus to requirements. What he needed was someone to supply the passes and crosses to the front line.

So he made a deal with Inter and swapped Boninsegna for two players – Sergio Gori and Angelo Domenghini. Gori would be the second striker while crucially Domenghini would be the play-maker providing the food to the goal-hungry Riva. The 69-70 season started well, but expectations of something special rose on the 12th October when Cagliari scored a crucial away win in an ill-tempered game against title holders Fiorentina. It put Cagliari at the top of the table.

A draw the following week at home against Inter sobered things up, but they stayed top, courtesy of Lazio beating Fiorentina.

Cagliari remained at the top of the table for the rest of the season though they were a slight wobble at Christmas time when regulation strugglers Palermo beat them, and Boninsegna got his revenge in February by scoring Inter’s winning goal at the San Siro.

The pivotal game of the season came on the 15th March when Juventus who had been snapping at Cagliari’s heels just one point behind, took them on at the Stadio Communale. A win for Juventus would see them leap over Cagliari as league leaders with just six games to go.

It was a fiercely fought match, with considerable controversy over a Juve penalty taken by Anastasi saved by Albertosi. Albertosi’s celebrations were cruelly ended when the referee ordered the penalty to be re-taken – and this time Anastasi scored. Cagliari won a penalty of their own with 7 minutes to go and the ever clinical Riva put it away. The game ended 2-2, Cagliari remained top, and the feeling now was the title was Cagliari’s to lose. 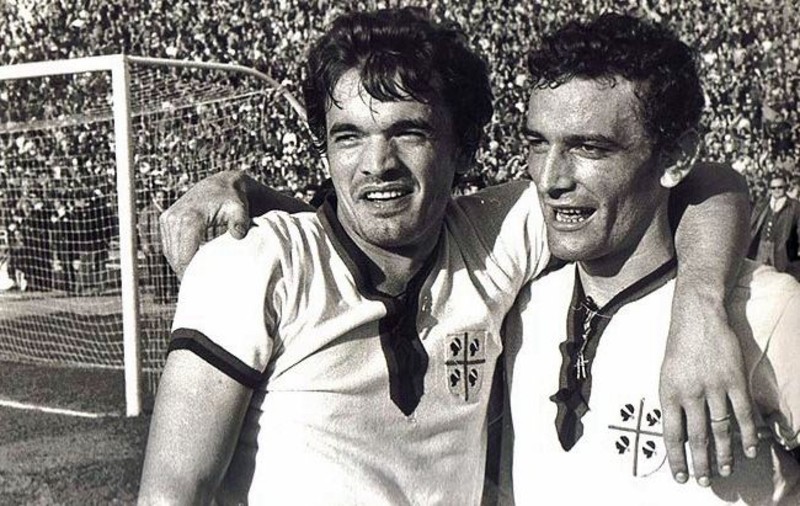 On the 12th April Cagliari played bottom of the table Bari. Just before half time, Riva headed in a corner to put Cagliari in front. The excitement started to mount at half time as fans with transistor radios got word that Lazio were beating Juventus. If it stayed like this Cagliari would win the title. All they had to do was hold their nerve and hope for another favour from Chinaglia & Co. Sergio Gori relieved the tension with a skilful second goal and then the crowd awaited the news from Rome. The final whistle blew and Lazio had won 2-nil. Cagliari had won the league with two games to spare. This was the first time a team from the South had ever won Serie A and the Island of Sardegna went into a rapturous celebration that lasted into the summer.

“Nobody who was there at the time can forget what happened. The morning after was even more beautiful. Beautiful because after Bari it seemed like a dream. But when we woke up it really sunk in that we had done it. And I understood it only then. It was Monday and I was with my team and Scopigno found us at the stadium, which was empty while 24 hours before it was packed. There, in the silence, we looked at each other and we realized it was all true” 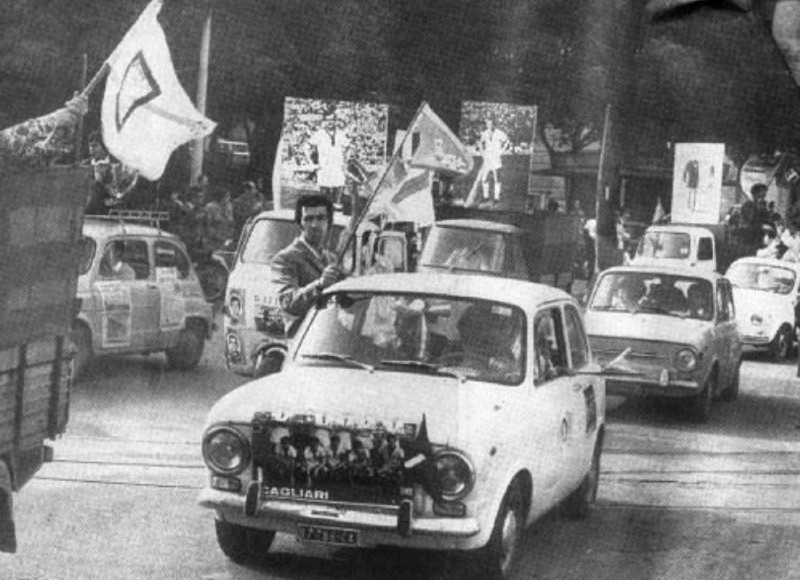 These are the words of the legendary striker Gigi Riva nicknamed “Rombo di Tuono” or the “Roar of Thunder”, the man of the moment and symbol of the Cagliari’s triumph.

All the big clubs had tried to lure him away, but Riva was happy and at home in Sardegna and not budging whatever they waved at him. He played out the rest of his career there.

But the success was not Riva’s alone. He was provided by the creative talents of Domenghini, Nene, Gori and Greatti. Super-sub Brugnera also provided some match-winning assists. Security was provided by the national side’s Goalkeeper (Enrico Albertosi) and the best defence in the land, conceding just 11 goals all season. 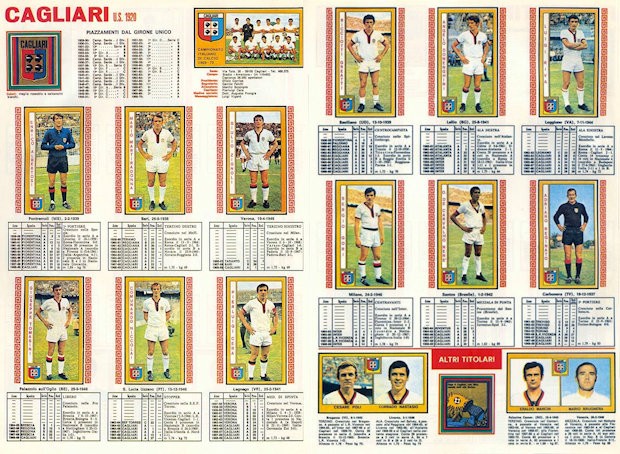 Cagliari’s hope of defending their title was cruelly smashed when Riva on international duty broke his leg. His prolonged absence meant Cagliari finished seventh the following season and Inter took the glory with Roberto Boninsegna crowned capo-cannoniere. Meanwhile, the mighty Juve boosted their squad with two young recruits – Franco Causio and Roberto Bettega. Anybody who knows their Italian football will know the significance of that.

For a footballing tale of David beating Goliath, there are more amazing achievements – for instance, Claudio Ranieri’s Leicester winning the Premiership was deep in the realms of improbability, while Cagliari began their winning season as one of the favourites. But this Sardinian Fairytale is a rare and inspiring example of the underdog winning the day.

“When we played at home,” said captain Pierluigi Cera “they were people who left from the inland mountains the Saturday night and the Sunday morning they were already outside the stadium waiting for us.”

The final words go to Gigi Riva - “Bandits and shepherds, that’s what they called us when we went to play at Milan or Turin. Instead in our crowd we just saw the faces of people from all over. They were miners, waiters, factory workers. Their joy was ours.” 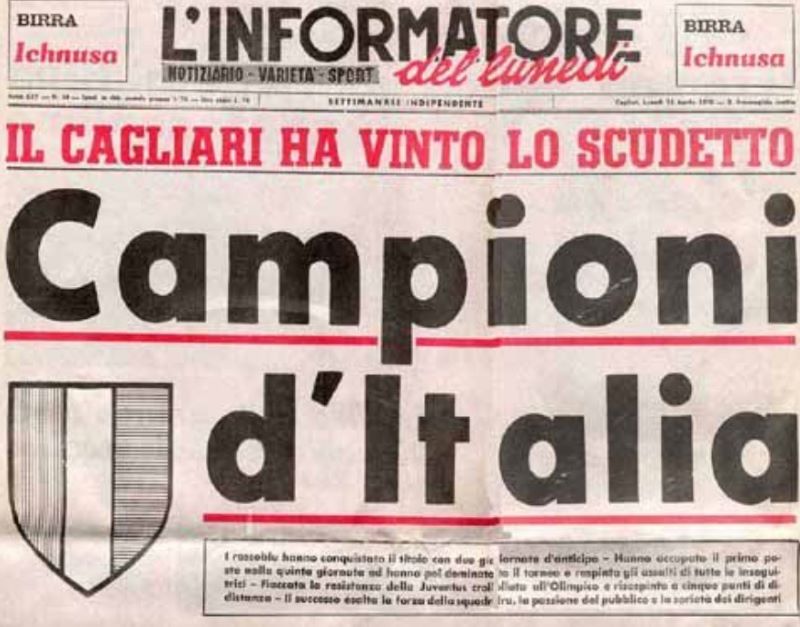